Watch Disclosure bring the stars out for their Coachella set. 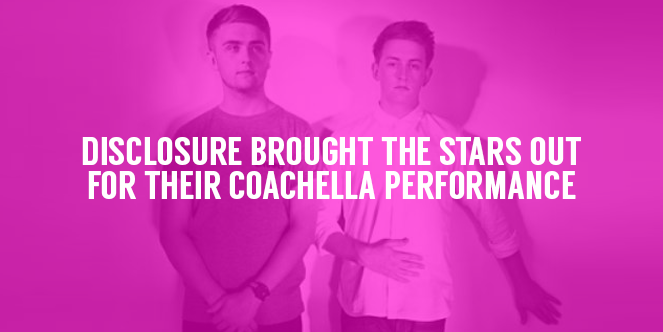 Disclosure have once again wowed crowds at Coachella Festival. This year they were joined on stage by superstar collaborators: Sam Smith, AlunaGeorge, Lorde & more..

The set kicked off with Aluna Francis of AlunaGeorge performing the vocals on ‘White Noise’ and was followed by a strong of the UK duo’s hits with different special guests throughout until finally, Sam Smith brought the house down with ‘Latch’ and ‘Omen’.

Check out a few videos that have found their way on to social media below:

Sam Smith coming through for Disclosure at Coachella???????? pic.twitter.com/JFnVJqd5Wu

Out Now on Soundplate Records