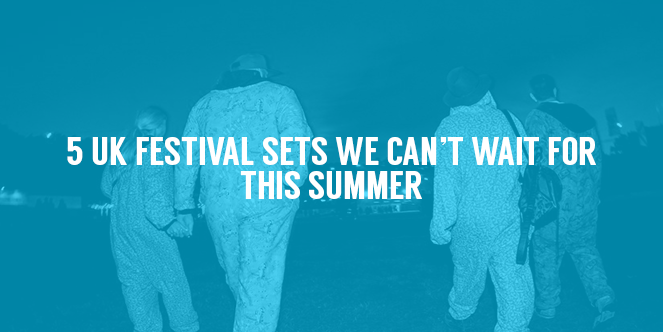 Marco Carola – We Are FSTVL – Paradise Stage (Sunday 29th May)

We Are FSTVL have pulled the rabbit out of the hat once again in securing the services of legendary techno ambassador Marco Carola. Heralding from Napoli, Marco will look to bring the European sounds to the Essex airfield. Carola is known for his mammoth sets; incorporating a complex and entertaining mixing style is sure to keep the crowd fixated throughout.

The Leeds based DJ and producer had to be on the list, appearing at a number of festivals across the UK, Hot Since 82 (Daley Padley) props up an impressive main stage at the 5th anniversary of Eastern Electrics – expect his masterpiece ‘Veins’ to become one of your summers most memorable moments.

After a triumphant return to Glastonbury last year, the 90’s duo now bring their live show to the capital. The string of ‘hits’ that the pair hold in their repertoire is endless and their most recent album shows that they are still able to influence the electronic scene in incredible fashion. Expect the common to be jumping by the time they touchdown.

Disclosure’s poppy blend of Chicago house will look to set a trend at the normally ‘alternative’ Reading and Leeds Festivals. It is a nod to how far ‘mainstream’ dance has come in the last 5 years that Guy and Howard have been entrusted with thrilling such a varied crowd – no doubt they will draft in a supporting crowd of artists to ensure they keep their crowd ensnared.

Expect Bicep to close a phenomenal summer with a memorable set here. After recently announcing their intentions to debut a ‘live’ show, a string of remixes and support from R1 dance – the pair are on course to deliver a show that could propel the duo even further into the stratosphere.