The major record labels control around 70% of the global recorded music market, but who are they? In this post we explore the major labels and give you all the information you need!

How Many Major Labels Are There in 2021?

Which Major Labels Are The Biggest?

Universal Music Group are currently the biggest label in the world. You can see the market share of each of the major labels in the chart below: 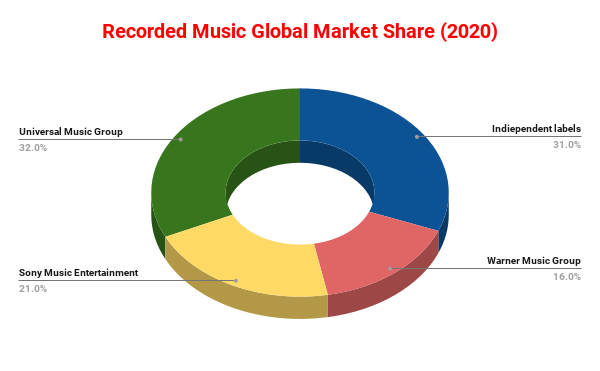 As you can see from the graph above, the independent sector is also a major part of the music industry. The indie sector is made up of thousands of smaller labels and distributors. While this post concentrates on the big three it’s worth keeping in mind that there are also thousands of successful artists signed to independent labels or working without a label.

How To Get  A Job With a Major Record Label

If you want to work at a record label, you will need to be able to prove you passion and dedication to the specific music industry job you are applying for.  Many people get their start with a music industry internship, others find their way in by networking or gaining experience in the independent music scene first.

You can find record label jobs and other music industry jobs at jobs.soundplate.com.

How to get signed to a major label?

Major record labels are always looking for new talent, they have large A&R teams that scout and develop new talent but impressing them can be tough.

There is no easy way to impress major label A&R‘s looking for new artists and to get a record deal. The best advice, if you want to get their attention is to start building an audience and build some buzz around your music. There are many articles and music promotion tools on Soundplate that can help you promote your music.

These days, artists often get signed after they have shown some success independently with their recorded or live music. So don’t wait for the deal, get started, build a fan base and let the labels & booking agents come to you!

Can I get an Advance without signing to a major label?

The Warner Music Group was formed in 1958 by Warner Brothers Records to purchase smaller independent labels as subsidiaries. Warner Music Group has been through many highs and lows in its history as major corporations have owned the company over the years.

Warner Music Group retains a 16% market share of the music industry with revenues of over $4.4 Billion dollars. Some well-known artists under this label include: The Doors, Pink Floyd, Led Zeppelin, Madonna, Wilco, and others.

Sony Music Entertainment was initially formed in 1929 as the American Record Corporation, later renamed the Columbia Recording Company. The company reorganized in 1966 and was renamed CBS Records. In 1988, Sony Corporation bought the company and renamed it to the current Sony Music Group.

Sony Music retains a 21% share of the music industry with revenues of over $7.8 Billion dollars. Sony Music artists include: George Michael, Michael Jackson, Bob Dylan, and others.

Getting on these playlists can be particularly difficult as they tend to focus on their own music but if you want to find playlists that are suitable for your music check out our free Spotify playlist submission system!