We catch up with German producer/DJ,  Purple Disco Machine, following the release of his second collaboration with Sophie and The Giants, ‘In The Dark’ (LISTEN HERE). 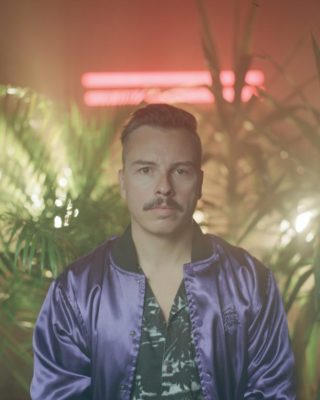 What tune ALWAYS goes off when you play it in your sets?

I’m not sure I could ever perform a set without playing “Body Funk” !


Tough Question! – If you had to choose a favourite between Chic & Earth, Wind & Fire who would you choose and why?

Very tough one. Chic I think. Probably the bass lines are the key factor here. That they lived on as samples in some of the biggest ever Hip Hop and House records is testament to how honed to the dancefloor they were.

Who is currently your favourite Disco artist, anyone we should be keeping an eye on this year?

If I’m only allowed to name the so called “Nu Disco” artists and not the 70’s & 80’s icons, then I’m always impressed with the US guys and their funk focused take on the genre. Chromeo, The Knocks, Yung Bae etc. I’m friends with all of them and we’ve done / are doing shows and collaborations together

What’s been your favourite event you have played since the world started to open up again?

Again a tough one as it was so great to play all the shows once we were allowed to, but I’d probably say EDC Las Vegas in October. The biggest crowd I’ve ever played in front of and I was blown away but how many people already knew and were into my music.

What’s on your rider – anything unusual?

Ha ! This is an in joke with me and my management team. It has to be a bottle of Tequila. It has always been on my rider, but I’ve never drunk it. I didn’t ask for it, but yet it remains. Every time.

Please tell us a little about your creative process, what’s the secret sauce that makes a PDM track special?

I always start with the drums. The right groove is the most important thing for me and my tracks. Then it is mostly about the bassline. I definitely spend most of the time on the bassline. It’s pretty important for me. Together with drums, this is the perfect way to start working on a new track.

Do you have any advice for upcoming producers that want to find/hone in on their own signature sound or style?

Finally, your brand new single ‘In The Dark’ featuring Sophie & the Giants is out now and it’s an absolute belter! Congrats! With your previous collaboration with Sophie & The Giants gaining over 200 Million streams on Spotify what do you think makes your collaborations so special?

Thank you ! Maybe it is never actually being in a studio together ?!?

Only joking as I’d love to be in a studio with Sophie and the Giants, but it is true that both our collaborations were produced remotely because of the pandemic. She is a great songwriter and singer so that really helps, but I think we just both instinctively know and appreciate what we are trying to achieve with the music. She definitely “gets” Purple Disco Machine and what I was trying to do with my ‘Exotica” album.