Jack and the Other is an indie electronic band comprised of brothers Cal Brown (vocals/guitar) and Jack Muta (production/keys). The duo’s music is purposefully eclectic, aiming to create in a format that’s unconfined by genre and allows any and all musical styles to influence their work.

They are currently rolling out their Sunglass EP via Soundplate Records.

‘I Need It’ is the first single from Sunglass and is available to stream everywhere now.

Jack: My name’s Jack, and my brother Cal and I make up an indie electronic band called Jack and the Other.

We’re currently based in Atlanta, Georgia, but grew up largely in Southwest Florida. Before that, we lived in a suburb right outside of Cleveland, Ohio. We’re East Coast babies.

Tell us about your recent single, ‘I Need It’ – how did it come about & what inspired the song?

Cal:  “I Need It” is kind of an odd duck when compared to our typical creative process. It started with a completely different instrumental that Jack sent me back in 2019 and I recorded some like droning, distant, overlapping vocals in different registers, repeating the words  “I Need It” and then in the second half, i wrote the verse melody and lyrics almost exactly how it came out on the final song. I sent it back to him as a file named “this is probably nothing.mp4”. But luckily Jack really dug it and ended up reworking the production.

While preparing our live show back in 2020, the version we were working with still wasn’t quite sitting right during the chorus, so we took another crack at it with a sort of old-school soul flare and it turned into what it is, which is now one of our favourites and what we wanted to kind of set the tone as the lead single for this EP. Sometimes it’s kind of a dice roll when you stick with a track for so long, but luckily it paid off for us this time and we’ve been really grateful for all the love we’ve gotten so far!

What’s your message behind this track?

Cal: I’m not so sure there’s any particular message in the lyrics so much as it’s taking a stab at giving a voice to my obsessive nature. I have a bad habit of treating hobbies like new identities, where I’ll pick up something random like whittling and then let everything else about me become irrelevant. I’ll walk around and talk about whittling exclusively for like 2 weeks, saying things like “Oh you didn’t know I whittle?” and “That reminds me of this whittling project I’m doing”.

The hobbies come and go pretty easily but unfortunately that obsessive indulgence in a new stimulation me applies to more than just hobbies, and not always in a healthy way. The lyrics of “I Need It” are sorta written from the perspective of the id that drives me to be consumed by whatever interest I fixate on. My hope is that some listeners identify with that tendency, which I think everyone has to some degree. Jack also helped me direct the lyrics of the final version to be less doom & gloom and more kinetic and enthralled which absolutely, I think, helps to connect the dots within the meaning.

Jack: In the beginning stages, it really varies from song to song. A lot of times it starts off with an instrumental idea or chord progression I come up with and then send off to Cal to see what he can do over it. Sometimes it’ll be Cal who records a quick guitar riff and vocal melody and then gives it to me to see if I can produce around it. More recently, as we’ve been practicing for our live show, we’ve been coming up with stuff more improvisationally, just kind of jamming together and trying out different ideas that we’ll record and then kind of flesh out in the DAW later that day.

In terms of developing and finishing the actual songs, I’m generally the primary producer of the instrumentals, besides the guitar parts, which are all Caleb. He’s also more of a ‘big picture’ guy and so will usually take the lead in song structure decisions. Though I think as we’ve grown individually and collaboratively, we’ve both taken a more comprehensive role. Cal does more now for the production than he did in our first EP and I’m now writing some of our lyrics which used to be something only he did. The one consistent thing over time is that we both have to feel good about each and every part for it to make it into the final song.

How excited are you to be releasing the Sunglass EP on Soundplate? Tell us a bit more about the project and how your sound has evolved…

Cal: We are so excited to be releasing this album. It’s something we’ve been working on for years and it’s incredibly rewarding to get to share it with our fans, so many of whom have been patiently waiting for us to release something new! Soundplate has been handling all of our marketing and outreach, and it’s honestly been really great since we’re pretty terrible at that part of being a modern musician.

In terms of our sound, this EP, Sunglass, definitely marks a new step for us that Jack and I are very excited to take. From the very first track we started with, the goal has always been clear in terms of the vibe and instrumentation. We wanted to incorporate more soul, R&B, and upbeat bedroom pop influences while also utilising more live instrumentation. We used the stuff we listened to as inspiration, and just kind of created freely, which is the original goal of JATO as a band. So I think this project is sort of a return to form as well as a step into something new and exciting for us.

We’ve been loving your live streams on Reddit & YouTube, do you have plans to take your show on the road soon?

Jack: Thank you! And yes! We’re finally getting ready to start gigging with Jack and the Other, which is actually a few years in the making. Back in 2019, we were a couple weeks out from our very first live show when Coronavirus shut everything down. We took it as an opportunity to focus on writing new music, and now that the album’s finished, we’ve refocused on performing. One thing we wanted to do differently than a lot of bands in the electronic genre is to avoid playing with any prerecorded tracks. Getting to that point where we can recreate our songs live has been a fun challenge, and we’re now putting the finishing touches on our live show. We’ll be playing as a trio with a very talented drummer named TJ Harris. We should be announcing some dates in the very near future! 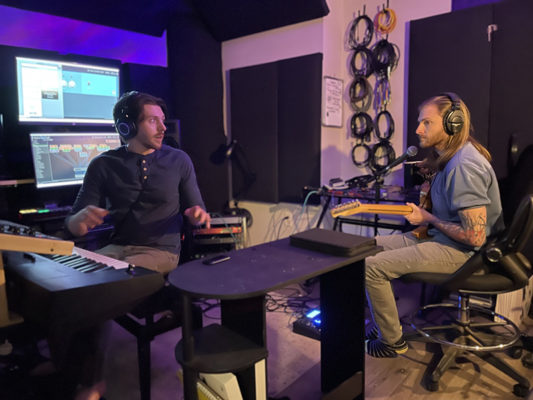 What’s the music scene like in Atlanta, are there any up and coming artists we should be on the lookout for?

Cal: Atlanta’s such a cool city because there are so many burroughs of different music scenes, if you like country/singer-songwriter, hip hop, blues,  metal, punk, edm, or almost anything else, there’s venues to hang around and artists to see. It’s a really unique setting that I truly didn’t expect when I first moved here somewhat brashly and without knowing enough. I don’t regret having made this my hub since I began music as a career even one bit. Some great local acts that we dig are Clayton Wyatt and Gus Glasser.

Was it a difficult decision to drop out of college to pursue your music career?

Cal: Hmm… Yes and no. Yes, it was difficult because I had to come to terms with the fact that I was going down this difficult road and I would have to tell my friends and family that I was doing something that has a very well-deserved reputation for being really really stupid. No, because I’ve been resolved to being a musician since before I graduated high school and the moment it became something that I was actively pursuing, I felt an insane sense of relief and excitement, like everything I’d bottled up for so long was able to be released into the atmosphere around me.

Jack: No, not at all. Law school was a drag.

Jack: It looks like a really awesome party where there’s like a really beautiful sunset in the background and that girl you have a crush on is staring at you with that look in her eye and you just won the school’s state championship trophy by saving your family’s ice cream store from being shut down by the evil corporate guys from the city.

Really though, it looks dope. We’ve got seven songs releasing on the Sunglass EP, a few brand new music videos, and some live performances. It’s going to be a great (rest of the) year.

Jack and the Other – “Flare’ will be released on Friday 8th July. Pre-save it now.