Glasgow Underground label boss, Kevin McKay has just released his latest studio album – ‘Goodies’. Following the release we caught up with the main man himself for a quick chat. 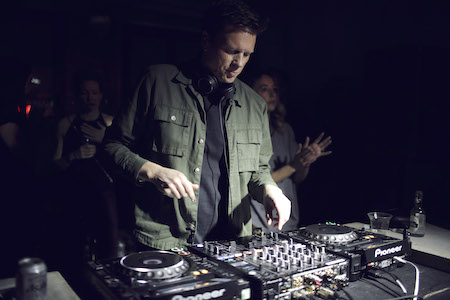 Please introduce yourself and tell us where you’re from?
Hi, my name is Kevin McKay. I was born in Edinburgh in Scotland and grew up in and around Glasgow. I now live in London.

Name one person who has had a big impact on your music career and tell us how they have helped you?
I know that I have helped many artists in their careers, but, in my experience, the music industry is not a helpful place. It is, in fact, the complete opposite of that. So much so I can count on one hand the number of people who have been helpful in the last thirty years. When I started Glasgow Underground, I learned by trial and error. None of the other labels in Scotland would offer any advice. Despite this, I have always remembered how tough it was and provided support to new artists.
That said, one person has had an enormous impact on my career: Sam Dexter. As well as running the A&R for GU, he has also A&R’d all my music for the last few years. His keen ears have allowed me to create freely, knowing that, if it’s good, Sam will jump on it. It means I can get from V1 of a track to V7 or whatever the final version is much quicker than I ever could alone. As a result, I am so much more productive than in the 90s or 00s. I feel lucky because finding someone you trust enough with your music to do that is not easy.

Describe your creative process/routine.
I start with an idea for a track that will fit a moment when I’m DJing. That can be anything from the perfect song to play when people are just kicking off a day party to the banger that you drop at 2 am to send everyone nuts. After that, I think of what I would want if I were on the floor. Then I look through sample material to find the right hook. After that, it’s building the right energy in the bass and drums and complimenting the melody with solid backing and then one or two more secondary motifs. This process usually takes a couple of hours. After that, I send it off to Sam for feedback and either finish it off (because he thinks there’s something there) or scrap it and start again!

Your record label ‘Glasgow Underground’ has been going for over 25 years, an amazing achievement! What is your favorite release from the label?
Thank you! It’s impossible to pick one, though. Each release is unique. Some are important commercially, some culturally, and others I have connected with emotionally. Of course, the latter is more pronounced on my releases! Tracks do come to mind, though, for the different situations. Romanthony’s “Bring You Up” is probably our most important record culturally. After that, Andrew Meller’s “Born Slippy” (our first Beatport #1) and my version of “Gimme Gimme” (the track I’ve seen most reaction videos of and our first to hit 10M streams).

What are your favorite things about running a label, and what are some more complicated challenges?
My favourite thing about running a label is that I always have new music to listen to every day. I also love that I have the freedom to release what I want when I want. Of course, there are challenges, but, to be honest, I love them too. The music business is ever-evolving, and there is always something new to learn.

Your brand new album ‘Goodies’ is absolutely brilliant, perfect for getting people on the dancefloor! So which track from the album are you most excited to be spinning this year?
Thank you again! I’m proud of the whole piece, and I made each song with a different dancefloor moment in mind, so it’s hard to pick one. However, I think the one I enjoy playing most is the version of “Ain’t Nothin’ Goin’ On But The Rent”. I love that song and feel like I made a respectful but modern version of it.

What song/project/album are you most proud of to date?
Wow, that’s a tricky question! I think there are two. My first release was on my label. I had to source the funding and work out how to do it from scratch, so I feel immensely proud. However, it’s hard to look past the Mylo album. I discovered him, signed him and produced his album. We had 5 UK top 40 hits; the album sold over 500,000 worldwide and still does millions of streams a year.

Finally, what are your plans for the rest of 2022?
I’ve mostly been making fun covers or tracks with big samples for the past few years. There are now loads of producers copying that idea, so I’m focusing more on original music this year. I have some wicked collaborations coming with LOVRA, Kyle Kinch, and others, as well as that my label,
Glasgow Underground, is starting a series of parties. Our first one is in London’s latest open-air club, Morden Wharf Terrace. It is an all-dayer on Sunday 12th June and features me with Nancie, Jen Payne, Sam Dexter, Mallin and Jade Cox.

Listen to ‘Goodies’ now on all good music platforms.