Jonas Blue has risen through the electronic music ranks to become one of the biggest electronic crossover producers in the world. WIth over 2 billion global streams and having been certified platinum over 120 times, there is a lot to talk about!

He has collaborated with some of the biggest stars in music and his new single ‘Perfect Melody‘ is out now – Click here to listen now! 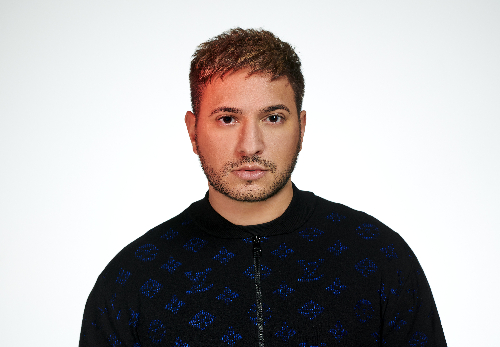 Hi I’m Jonas Blue (but my parents call me Guy ) – I’m born and raised in Essex just east of London.

Can you name one person who has had a big impact on your music career and tell us how they have helped you?

Has to be Calvin Harris, I have so much respect for him as a producer and songwriter, I’ve always been inspired by him and more recently have had a few conversations with him that have been really helpful and insightful.

Tell us about your new single, ‘Perfect Melody’ – how did it come about & what inspired the song?

I met Julian Perretta who features on the song a while ago when we were both performing at a radio festival in France, we had always talked about working together but the right opportunity didn’t arise, then he sent me a voice note demo of the song idea and it instantly grabbed me and knew this was the moment for us to collaborate, we took a long time and many versions of the track for it to be finished but was absolutely worth it. The song is a classic love story really about a past love who you were in perfect harmony with.

Your break-through track ‘Fast Car’ is steadily approaching 1 billion plays on Spotify. An incredible achievement for any artist. When you were making the track did you ever imagine that it would go on to reach so many people?

I definitely had a feeling it was something special, but it’s crazy to see it reach so far and wide across the globe!

Describe your creative process / routine..
I usually start at the piano with a songwriter or 2 in the room working with me and we just vibe on ideas and know when we land on the magic then focus in on it, I usually have a concept or a title in mind before we start, we get the raw stripped back song down then I worry about the full production at a later stage, as to be honest that usually takes much longer!

You have collaborated with some huge artists. Do you have a favourite collaboration and why?

I think JP Cooper has to be one of my favourites, we continue to write together now and have a new song coming later this year. He’s really a part of the Jonas Blue sound!

Again Perfect Strangers with JP Cooper was such an important single as it proved I was a serious artist – so many acts come up through dance music with a cover or sample and don’t follow it up, but we came with a song that really proved that we were 100% serious!

Finally, after such an incredibly successful last few years, what does 2022 hold for Jonas Blue?

Very busy touring again which I’m hugely grateful for after a strange couple of years, and I’m dropping by second album later in the year “Together” which has a bunch of collaborations I’m really excited about.